Yesterday, prior to Mark Driscoll’s resignation announcement, Warren Smith posted an article at World magazine which summarizes many of the controversies surrounding Mars Hill Church.  In it, Smith tells of statements made by Dan Busby, president of the Evangelical Council for Financial Accountability about Mars Hill.

The ECFA’s Dan Busby told me in July that his group reviewed Mars Hill Global and found it to be in compliance with ECFA standards. In September, a week after Driscoll announced his sabbatical and the church announced its review of his behavior, Busby said, “ECFA will let the church complete their review. Then, ECFA will be in a position to determine if our separate review of the same issues is warranted.”

The ECFA’s statement regarding Mars Hill Global is useless without explanation. Essentially, the ECFA is asking the public to accept their word. No explanation or rationale was provided as required by their own principles (now purged from their website).  Just a couple of days ago, ECFA promised:

Another page (which is also now missing – see cache) promised that all allegations which involved their guidelines would be investigated. 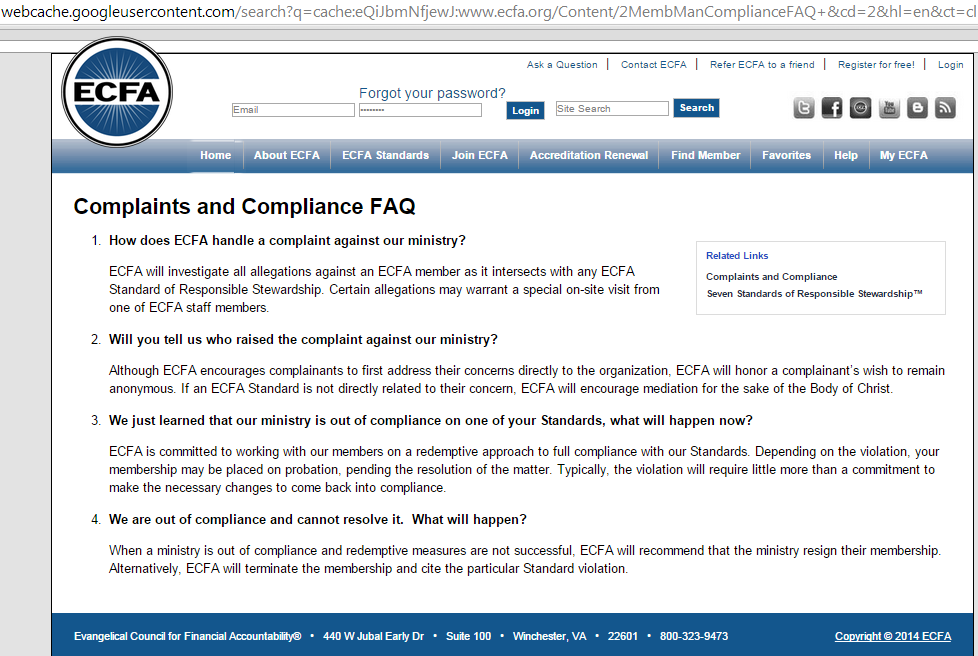 I have raised several issues about Mars Hill’s lack of compliance with ECFA guidelines and the ECFA has never suggested mediation. All I have gotten is an assurance that everything is as it should be without explanation. I don’t know of anyone who has leveled a complaint with the ECFA who was pointed to mediation.
Since I raised the issue of a public statement with Dan Busby, there has been no response from the ECFA except to purge two pages from the ECFA website. I know of no direct response to the hundreds of people who have signed the ECFA/Mars Hill petitions which request increased transparency from both groups. It is amazing that people would have to beg for an organization to live up to its name.