On Monday, the newly formed Mars Hill Church Board of Elders posted a message on the Mars Hill website written by Mars Hill Sammamish lead pastor Alex Ghioni. Ghioni had posted another version September 5 on The City (also posted on Reddit).
The versions are slightly different with perhaps the most interesting difference being the source of the charge for the Board of Elders. Last week to his congregation, Ghioni said the executive elders were responsible: 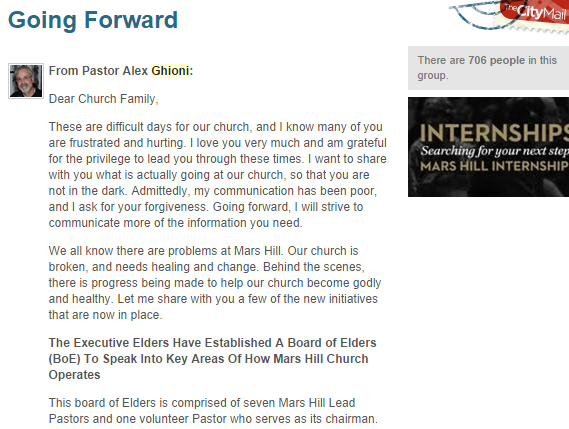 The current version says that the Board of Advisors and Accountability established the BOEs.

I don’t know what to make of this change, and perhaps Ghioni was confused about who established the BOE. However, Mark Dunford in his resignation explanation letter stated that the executive elders constructed the BOE:

This, after the Executive Elders (of which he is one) added three additional members to the board that would adjudicate his charges and having created/restored the Board of Elders to investigate those charges. I want to be clear that the elders themselves are not involved with selecting who would serve on those boards. Again, it was the EE who made those decisions.

By bylaw, both the BOAA and EEs have the power to establish ad hoc committees. So does it matter who selected the BOEs?

Yes, I believe it does. Dunford’s assertion that the EEs chose the investigation committee, if correct, is important. If those who are to examine charges were chosen by their fellow elders, then those selected have a greater likelihood of being representative of the sentiment of the Full Council of Elders (including at the time, those nine elders who called on Mark Driscoll to enter an elder directed restoration process). It seems more likely that all voices and views would be heard if all 50-60 of the Mars Hill elders were involved in selecting the committee to examine the charges. However, according to Dunford (as well as other insiders I have spoken with) and Ghioni’s first communication, Mark Driscoll, Sutton Turner and Dave Bruskas selected the group who are charged with investigating Driscoll. This does not sound like a process marked by objectivity.

Furthermore, according to Article 12 of the bylaws, the BOAA’s independent members are the ones who are supposed to investigate charges against Mark Driscoll, not an ad hoc committee. 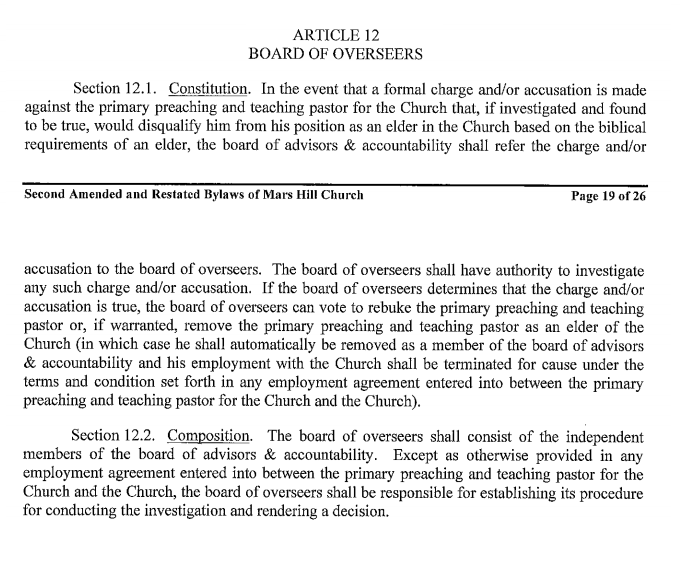 This article was written solely to address charges against Mark Driscoll. In it, the board of overseers (independent members of the BOAA – Michael Van Skaik, Larry Osborne, Matt Rogers, Jon Phelps) “shall be responsible for establishing its procedures, for conducting the investigation and rendering a decision.” However, according to Alex Ghioni’s communication, the BOEs will conduct the investigation. 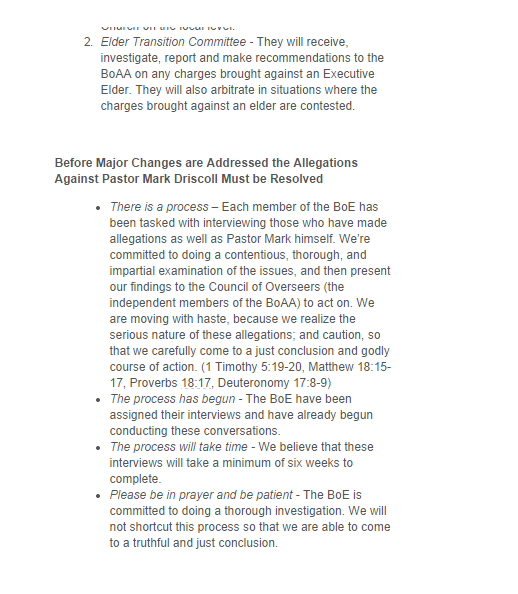 In his September 5 communication, Ghioni indicates that the BOE will investigate and then present their findings to the board of overseers. In the September 8 web posting, Ghioni/BOEs expand the description:

I really don’t understand how it helps establish accountability to learn that Mark Driscoll and his executive elder colleagues wanted a group of hand picked subordinates to examine the charges.
It appears to me another problem exists for this process. Given that the BOAA are responsible to investigate the charges, bylaw change should be required to allow them to pass this duty off to another committee. However, a quick check of the bylaws posted on the Mars Hill governance page shows no such change. The Going Forward documents seems to clean up the earlier document posted by Ghioni but it is not clear at all that the process is operating in accord with the bylaws of the organization. Given the admitted lack of transparency at Mars Hill, there is reason to question what is really happening behind the scenes. In both accounts, it appears clear that Mark Driscoll and his fellow executive elders have chosen a group of subordinates to investigate the charges against him. This will be at least the second time the BOAA has had charges against Mark Driscoll presented to them which they have not personally investigated.
In the second communication on the Mars Hill website, Ghioni anticipates some of these concerns:

Some have questioned my, and other BoE members, impartiality in conducting this investigation. I want you to know that I and the other board members know that we will stand before the Lord and give an account for our service to His church. Ultimately His opinion of how we conducted ourselves in faithfulness to his word will be are our guide (1 Timothy 5:19-20, Matthew 18:15-17, Proverbs 18:17, Deuteronomy 17:8-9).

This of course remains to be seen. All one can do is observe the process and communications about the process to the present. According to these communications (which have changed in the space of four days), the executive elders asked for a committee of subordinates to examine charges against Mark Driscoll. The EEs, either with or without input from the rest of the BOAA and no vote of the Full Council of Elders, chose pastors who are subordinates to be on the BOE. In contrast to the bylaws requirement that the BOAA investigate the charges, the BOE are currently investigating the charges and will report their findings to the independent members of the BOAA. The BOAA, which includes two people who dismissed charges after calling no witnesses the last time charges were lodged, a sitting volunteer elder and the most generous donor in Mars Hill’s history, will then decide the verdict.
If Mark Driscoll wants to come back as lead pastor, I like his odds “Going Forward.”