As has been widely discussed on social media, Mars Hill Church announced in the weekly email to their congregation that James MacDonald, pastor of Harvest Bible Fellowship, resigned from the Board of Advisors and Accountability. The BOAA is Mars Hill Church’s governing board and is made of the executive elders (Mark Driscoll, Sutton Turner, Dave Bruskas) and four men who are not members of Mars Hill (now just two — Larry Osborne and Michael Van Skaik). The email message also provided a confusing update on Paul Tripp who also resigned from the BOAA. In reaction to the emails, two current elders blasted the emails as being “spin” and demonstrating a lack of transparency.
The entire message is below (link to image):

“Upcoming Changes to the BOAADr. Paul Tripp joined our Board of Advisors and Accountability in November 2013 and has been an immense help to our leaders over the past year. Dr. Tripp has extensive experience in discipleship and Biblical counseling. Earlier this month, we made the decision together to open the opportunity for him to work with greater focus on issues directly related to his expertise, namely the continued development of our community and redemption ministries.Because simultaneously being a board member and a consultant does not allow for the required definition of “independence,” Dr. Tripp graciously submitted his resignation from the BOAA in early June, so that he can more extensively serve our church as a consultant. We are excited to continue this work with him, and are thankful for his continued support of Mars Hill Church.Similarly, Pastor James MacDonald informed the board at the July meeting of his decision to transition from his current role on the board pending his replacement. Pastor James has been a great help in forming the current board’s direction, and we are very grateful for his time and wisdom over the last several years. About this transition he commented, “I have great love and affection for Mars Hill Church and I want to make clear this change is not because I am unhappy with Mark’s response to board accountability. On the contrary, I have found him to be exemplary in his current readiness to live under the BOAA oversight. I am not resigning because I doubt Mark’s sincerity in any way. I believe in Mark Driscoll and his heart to leverage difficult lessons in service to Christ and his church in the years ahead. I am excited to continue to support that trajectory as Mark’s friend, as I focus my efforts on Harvest Bible Fellowship.”About these transitions, Pastor Mark shared, “I am thankful for the service of both Paul and James, two men I admire and respect. Their service on our board has been a blessing to me and Mars Hill Church in countless ways. The amount of hours they have given as volunteers is extraordinary, especially in light of their other ministry demands.”Candidates are currently being interviewed to replace these open board positions. They will be submitted before the Full Council of Elders for their approval as soon as possible.”

Taking together this message and another one which was sent today to the full council of elders, the timing of the resignations is confusing. According to the above communication, a joint decision was made “earlier this month” (although the email is dated August 1, I assume “this month” means July) “to open the opportunity for him [Tripp] to work with greater focus on issues directly related to his expertise, namely the continued development of our community and redemption ministries.” Then the email discloses that Tripp “graciously submitted his resignation from the BOAA in early June” so he could work as a consultant for the church. This email makes it sound like he resigned a month before a decision was made to retain him as a consultant.
Tripp’s decision to resign sparked concern in several of the former pastors who requested mediation with Mars Hill. Currently, a mediation group is holding meetings with former pastors and others who desire reconciliation with the executive elders. That group of elders were not informed of Tripp’s June resignation until this week.
Another point of confusion was the timing of James MacDonald’s resignation. According to the email above, MacDonald informed the BOAA of his decision to resign at the July 6 BOAA meeting. However, the full council of elders were told today in an email from Sutton Turner that MacDonald informed the BOAA board chairman “late this week” that he would like to step off the board. See the email below: 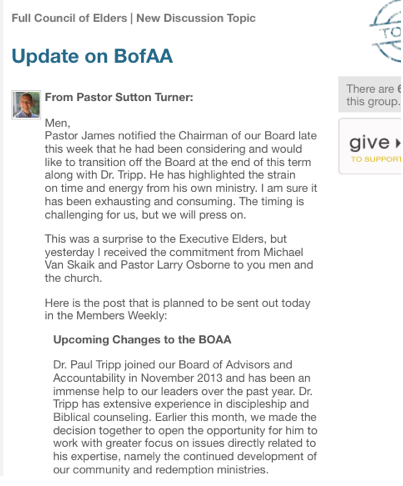 The email to the full council of elders also says MacDonald’s announcement was a “surprise to the Executive Elders.” It is unclear which email is correct.
In addition to concern among former elders, the announcements today also upset at least two current elders who spoke on condition of anonymity because they fear retaliation. One said, “Once again, just another sad example of trying to spin the truth into something more manageable, instead of just accepting reality.” Another current elder was more pointed, saying, “Time and time again I’ve seen Sutton lie to the church and not be willing to be transparent about what is going on. Our people deserve better. Sutton is a sad excuse for a pastor and should have never been put in this role.”
While there may be an explanation for these discrepancies, these current elders believe they have been deceived about the reasons for the BOAA resignations.