How much of the Global Fund did you spend on international outreach and how much was spent on U.S. outreach during FYs 2013 and 2014?
On June 3, I posted a question for Mars Hill Church: Where did the Global Fund go? Yesterday, Mars Hill Church addressed that question and a few more by placing a frequently asked questions page about Mars Hill Global on their website.
Here is the answer:

WHAT HAPPENED TO THE GLOBAL FUND?

Since 2009, the term “Global Fund” has been used to help us distinguish between donors who attend our churches and donors who follow us online. Donations to the Global Fund were originally used to “start new Mars Hill campuses, plant new Acts 29 churches, and equip leaders at the Resurgence Training Center (Global Newsletter from 7/7/2009).” To reduce any confusion the name may have caused, we have since consolidated the “Global Fund” into the “General Fund (Local & Global)”, as that is where your gifts have always gone.

While it is nice to have a clear admission that gifts to the Global Fund have always gone to the Mars Hill General Fund, it would be nicer still if the Mars Hill executive elders would own and explain their contribution to the confusion. Clearly, the name was confusing and it is incredible for Mars Hill to admit that the church gave donors two giving options but the gifts have “always gone” to one fund in spite of the designation of the donors. Why have a Global Fund associated with Ethiopia and India if the money donated to it really just went to the General Fund and was mostly spent in the US?  Isn’t it fundamentally deceptive to have two funds with different names which really just go to the same purpose?

Now, Mars Hill leaders claim that the term “Global Fund” has been used since 2009 to help them distinguish between donors who attend Mars Hill churches and those who don’t but watch sermons online. However, this answer raises more questions because elsewhere Mars Hill Global is defined differently than now on the FAQ page. In a video that precedes every sermon from November 24, 2013 to April 27, 2014, executive pastor Sutton Turner said that both Mars Hill members and those who watch online should give to Mars Hill Global.  Watch (transcript follows):

Howdy Mars Hill Church, pastor Sutton Turner here and I’m in Ethiopia, and I just want to thank Jesus for continuing to use Mars Hill Church to make disciples and plant churches. Mars Hill Global is the arm of Mars Hill Church that makes disciples and plant churches all over the world. We not only do church planting, but we help better equip church planters. Most recently, we shipped and now distributed a thousand Bibles into Amharic which is the language here in Ethiopia, and we launched a project to translate Pastor Mark Driscoll’s Doctrine book into Spanish. We have people from over 29 different countries that are giving on a monthly basis to Mars Hill Global.
So whether you’re a member of one of our Mars Hill Church locations in the United States or you’re one of 100,000 podcasters every single week, we encourage you to pray about giving above and beyond your tithe to Mars Hill Global. Thank you and let’s see more materials translated, more pastors sent out, more churches planted, and more people saved by Jesus Christ.

Clearly Turner here distinguishes between the General Fund (“tithe”) and Global Fund (“beyond your tithe”). There are several other videos posted throughout 2013 and 2014 which contain similar messages. Clearly, Mars Hill Global Fund then was about more than distinguishing between members and non-members. Members were asked to give to the fund and were able to designate gifts to the Global Fund until May of this year. Furthermore, the annual report for Fiscal Year 2013 defines Mars Hill Global differently than the FAQ does now: 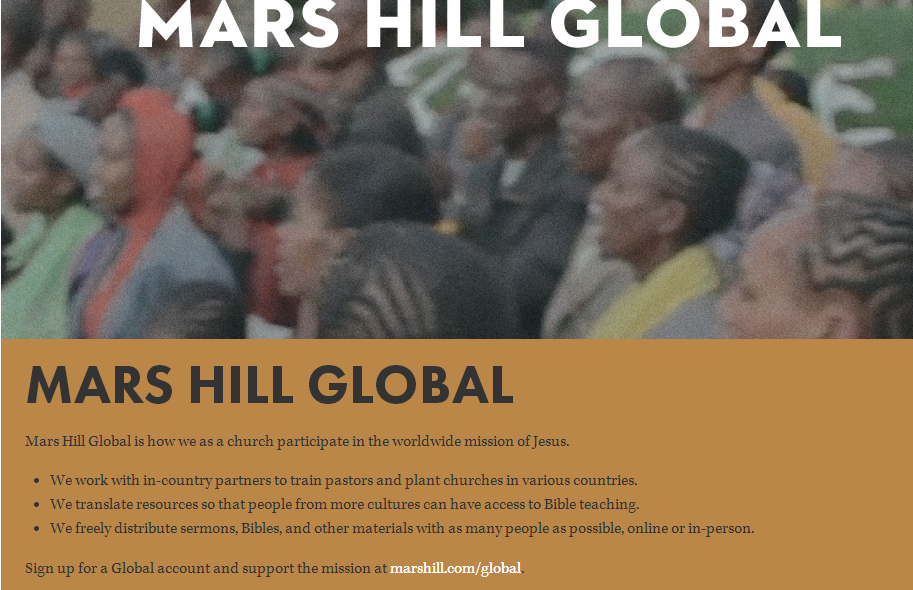 In this annual report, Mars Hill Global is defined as something that Mars Hill Church does (“participate in the worldwide mission of Jesus”), not a way to distinguish between members and non-members.

When Mars Hill Global transitioned from being a platform to give money for The Resurgence, Acts 29 Network, and Mars Hill church planting efforts, the definition changed. Those who went to Marshillglobal.com in the latter half of 2012 were greeted with this screen: 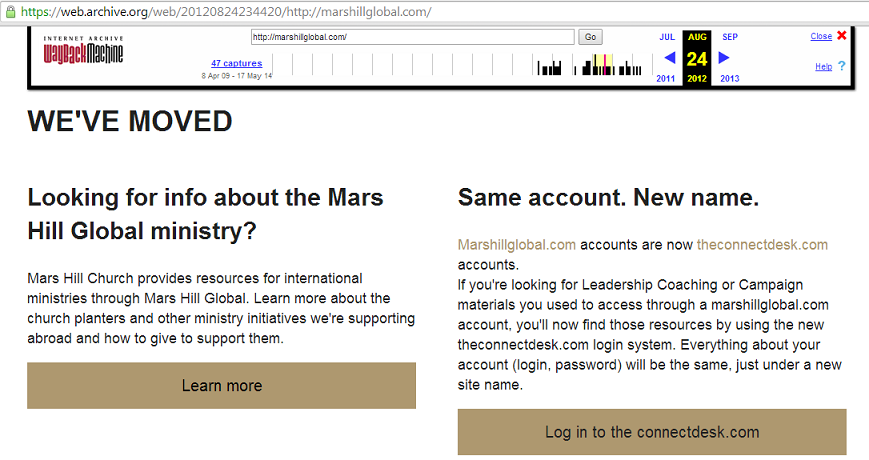 With this definition of Mars Hill Global, it makes sense that people would expect that donations to the Global Fund would go toward “international ministries.” However, now we find out that all along the donations were going into a general fund and used to fund Mars Hill franchises in the United States. Furthermore, when donors gave money via the website, they had a choice to give money to the Global Fund and designate their location. Watch this demonstration of how the website worked prior to May 2014.

As the video demonstrates, Mars Hill donors had an option to designate gifts to a Global Fund until May of this year. Now, donors who want to give to international missions through Mars Hill must do so by giving to the General Fund and hope that the leaders will allocate money to that end.  In fact, the FAQs address the fact that there is no direct means to support the international efforts of Mars Hill.  According to the FAQ:

CAN I DESIGNATE MY GIFTS TOWARDS INTERNATIONAL MISSION EFFORTS?

To better support Jesus’ mission and to allow us to effectively and efficiently steward the resources that God has provided us, we encourage all donors to send in their gifts unrestricted so that we can apply them where they are needed most. We believe scripture clearly calls us to be on Jesus’ mission, whether here in the U.S. or in other countries. As such, every donation is a contribution towards our efforts to carry out his mission, here in the US as well as India, Ethiopia, and around the world. Your support means more people are saved by Jesus Christ, more people are growing as disciples of Jesus, and more churches are being planted, no matter the location. You may contact giving@marshill.com if you’d like information on sponsoring specific needs and projects.

At the end of the day, the question remains: How was the money spent that donors designated to the Global Fund? Given that most of the promotional videos for Mars Hill Global were about Ethiopia, it seems reasonable that donors would expect that a large amount went there. However, unless Mars Hill provides a report, there is no way to know.
One reason this issue is important is due to Mars Hill’s accreditation by the Evangelical Council for Financial Accountability. Ultimately, the ECFA may be the only leverage that the public has to get this information. ECFA’s standard 5 requires organizations to be transparent and provide an accounting of project based giving upon request.

Project reporting.  The standard provides that “on written request,” every accredited organization “must provide a report, including financial information, on any specific project for which it sought or is seeking gifts.” Project reports communicate project results to donors and are a further evidence of the ministry’s accountability.
A “project” generally occurs when a donor places a restriction on a gift as to purpose, or a ministry accepts contributions that are solicited for a specific area of ministry, such as a program or project. Solicitation for project-related gifts may occur via fundraising events, through direct mail, Internet solicitation, by radio or television, and in other ways.
Unrestricted contributions have no implicit or explicit time or donor restrictions and are available to be used at any time and in any exempt area or operation of the organization. Therefore, project reporting does not apply to unrestricted gifts.

According to this ECFA guideline, unrestricted contributions are not subject to the same reporting requirements. Mars Hill appears to be making a case via the FAQs that the giving to the Global Fund was always unrestricted. Certainly they prefer it to be that way now according to the information provided above.
But was the Global Fund giving unrestricted during the 2013 and 2014 fiscal years? To me, it seems that since donors had an option to give to the General Fund or to the Global Fund and the Global Fund was being defined at the time as the church’s means to participate in the “worldwide mission of Jesus,” then Mars Hill is obligated to provide an accounting for at least FY 2013 and 2014 in accord with Standards 5 and 7.2 of the EFCA guidelines. I have asked the EFCA if they intend to require this accounting and they have yet to comment, saying only that they can’t comment while an organization is under review for compliance related issues.
In the mean time, perhaps Mars Hill will add the unanswered question to their FAQ and end the suspense.