On the church website (click Downloads), Mars Hill Church has responded to the controversy over plagiarism. In a statement about the book Trial: 8 Witnesses From 1 & 2 Peter, Mars Hill blames researcher mistakes:

In 2009, Pastor Mark preached through 1 & 2 Peter in a sermon series called Trial. To help our small groups, a team of people including a research assistant, put together a free study guide that was produced in-house and was never sold. About 5 years later it was brought to our attention that it contained some citation errors. We have discovered that during the editing process, content from other published sources were mistaken for research notes. These sentences were adapted instead of quoted directly. We are grateful this was brought to our attention, and we have removed that document from our website to correct the mistake. Additionally, we are examining all of our similar content as a precautionary measure.

I examine this statement below, but one claim in it appears not to be accurate. The statement says the study guide was never sold. It is being sold presently by Logos Research Systems as a download. Product details are listed as:

Furthermore, at one point Driscoll’s The Resurgence website advertised printed copies in bulk. 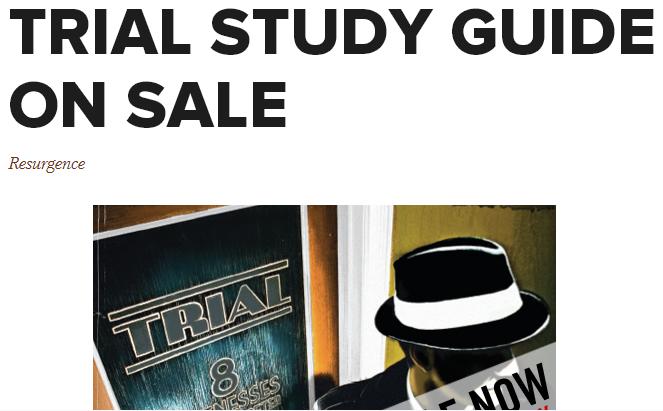 (I noticed later this evening that Mars Hill removed the page advertising the bulk sales. It is on Google cache now and in addition to the image above, I have screen caps here and here.)

Mars Hill’s statement comes as publisher Intervarsity Press weighs in on the sections of their New Bible Commentary which appeared in the Mars Hill study guide without citation. According to IVP, material from the New Bible Commentary “improperly appeared without quotation or attribution” in Mark Driscoll’s book Trial: 8 Witnesses From 1 & 2 Peter.  In a statement released to Christianity Today this morning, IVP said:

Several paragraphs from the New Bible Commentary edited by G. J. Wenham, J. A. Motyer, D. A. Carson and R. T. France published by InterVarsity Press appear in Mark Driscoll’s now out of print book Trial: 8 Witnesses From 1 & 2 Peter. These improperly appeared without quotation or attribution. With proper citation the material would have been a case of fair use.
InterVarsity Press believes all writers should use great care as they do research and prepare texts for any use to make sure that proper acknowledgement is given to source material.

One can see the side-by-comparisons of Driscoll’s book with the New Bible Commentary below: 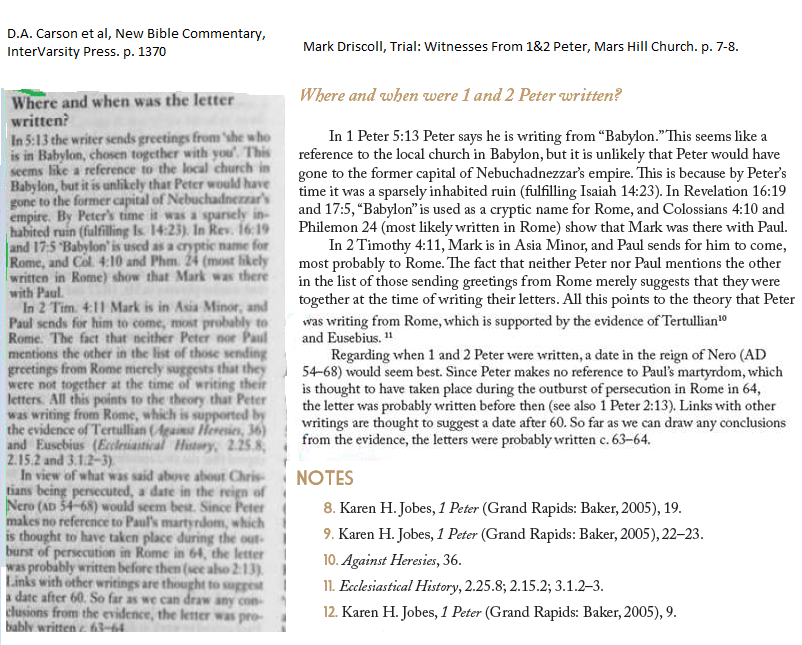 In this second image, one can see that notes 10 and 11 are drawn from the New Bible Commentary text and presented as if Driscoll researched his information from Against Heresies and Ecclesiastical History.

The Mars Hill statement references “a team of people” who put together the study guide (which isn’t available on the church website now). However, Driscoll is clearly listed as the author. Brad House is listed as an author of the section on “community group resources” but Driscoll is the only other author listed. See below:

Thus, a reader would certainly assume Driscoll authored the section in question. If the statement can be taken at face value then it appears that Driscoll took credit for authorship of a book authored by a team of people and a research assistant.