Sunday, Salon briefly reviewed a book by Debbie Nathan which claims to debunk the case of Sybil. Sybil, actually a young Minnesota girl named Shirley Mason, was one of the first cases of multiple personality disorder to catch the public attention. The book about the case sold 6 million copies and inspired a movie starring Sally Field.
The Salon article by Laura Miller gives enough detail to hook my inner skeptic. According to Nathan, most of the details reported in the book were fabricated, based on grueling sessions where Shirley/Sybil was under the influence of Sodium Pentothal, administered by her psychoanalyst, Cornelia Wilbur. At one point, Shirley Mason wrote Wilbur confessing that the information about lost time, and other personalities was made up to keep her therapist’s attention. Miller writes:

Nevertheless, Mason did at one point attempt to jump off Wilbur’s train, writing her doctor a long letter confessing that all the multiple-personality stuff — the lost time, the named “alters” and the grotesque tortures supposedly inflicted on Mason as a child by her supposedly psychotic mother — had all been made up. Wilbur briskly dismissed this as a “major defensive maneuver” designed to derail the “hard work” of therapy lying ahead. The pitiably vulnerable Mason soon caved.

The Salon article and the book it features would be interesting enough for a post. However, it gets more interesting. While she was involved in the invention of multiple personalities, Cornelia Wilbur was a member of the Society of Medical Psychoanalysts, along with Irving Bieber. In fact, she was a co-author of the famous “Bieber study” from which current reparative therapists derive much of their claims about the causes of male homosexuality. The Bieber authors surveyed psychoanalysts about their patients (presumably Wilbur was one of the participants as well) and reported their results in the 1962 book Homosexuality: A Psychoanalytic Study. 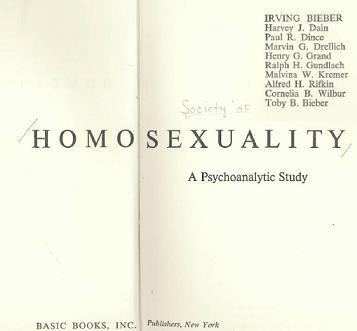 The Bieber study has been widely criticized, and for good reason.  First, the homosexual participants were psychoanalytic patients in analysis with doctors who already believed that homosexuality was a pathological condition. Also, the patients themselves were never interviewed. Rather, the authors surveyed the analysts to assess the histories and attitudes of their patients. The analysts had already formed the opinion that homosexuality was shaped in childhood and that is exactly what they reported as results.
So it is intriguing to read about Cornelia Wilbur’s conduct in relationship to her most celebrated case. Is it possible that her biases about homosexuality operated first in the Bieber study? While one cannot say based on the case of Sybil, I think is natural to question her part in the Bieber study as a result. This seems especially true given how open the Bieber methodology was to confirmation bias.
The Bieber study is central to reparative therapy. Whenever I have asked reparative therapists for the three best studies which they believe support reparative therapy, they always mention Bieber.
A number of studies mentioned over the years as supports for sexual reorientation change efforts have later come into disrepute. Rekers work with Kyle Murphy, and the Masters and Johnson studies are just two other prominent investigations which later have been questioned.
Additional information: The New York Time Magazine has a lengthy piece on Wilbur and the Sybil case here. This article makes it clear that the sessions with Mason took place while Wilbur was involved with the Bieber study.