Tomorrow, April 15, marks the day in 1947 when Jackie Robinson broke the color barrier in major league baseball. The executive who signed him with the express purpose of combating racism was Branch Rickey, President of the Brooklyn Dodgers. Today, CNN reports that Branch Rickey’s faith was a strong motivation for his decision to sign Robinson. Roll the tape:

I watched the CNN segment this morning and reporter Ed Henry said that he told President Obama about the segment of Robinson and Rickey. Obama commented that the Rickey-Robinson breakthrough had impact on every part of American society, including his election as the first African-American President.
I share a hometown with Branch Rickey — Portsmouth, Ohio — and was always reminded of his legacy because I played my high school baseball in Branch Rickey Park (pictured below). 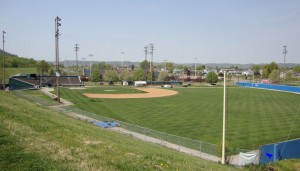 To me, Branch Rickey’s role in this story is sweet irony. Race relations were tense in my hometown. For most of my life there, African-Americans were segregated into neighborhoods surrounding a large public housing project. There was strong prejudice and discrimination there, even among Christians. And yet, Branch Rickey left the small town to make history in the big city in a way that changed attitudes about race forever.
Watch the clip or read the entire transcript here but I will close with this paragraph: