The 9th largest monthly magazine, Ladies Home Journal, has an article out on newstands today which addresses anti-gay bullying. The article by Kenneth Miller is titled, “Gay Teens 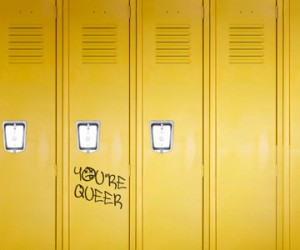 Bullied to the Point of Suicide” but covers the entire topic of anti-gay bias and religious tolerance. The subtitle, “It’s a shocking trend. Isn’t it time for all of us to encourage compassion and respect, no matter how we feel about homosexuality?” captures the tone of the piece aimed at the moderate to conservative readership of LHJ. I think Miller and the LHJ staff did a nice job of bringing in a variety of voices to urge a united voice against anti-gay bias and bullying. Full disclosure: I am a bit biased since I have a couple of quotes in the piece. The article sets the stage by calling out the extreme rhetoric used by some social conservatives:

“Despite recent cultural shifts, kids still get the overwhelming message from society that homosexuality is not acceptable,” says Scott Quasha, PsyD, a professor of school psychology at Brooklyn College. It’s not uncommon to hear fierce condemnation from politicians and preachers as they debate gay civil rights. Homosexuality is compared to incest, bestiality, even violent crime. “This trickles down into the schools, where bullying occurs,” says Dr. Quasha. “A gay child is an easy target for classmates looking to make trouble.”

Antigay bullying is something all parents should be concerned about, says Merle Bennett Buzzelli, who oversees the public school antiviolence program in Akron, Ohio. “The victims are not just students who are actually gay,” she points out — the abuse is also directed at straight kids who don’t quite fit gender norms. Tomboyish girls and guys who show interest in, say, gymnastics or dance are often called the same names — and subjected to the same ostracism and attacks — as their gay and lesbian classmates. There’s no evidence that Billy Lucas was gay, but he was “different,” classmates said. Because of that, bullies called him “fag” and told him he didn’t deserve to live. Of course, for kids who do experience same-sex attraction, the use of the word gay as an all-purpose put-down is just one more painful indication that they don’t fit in, whether or not they look or act any different from their peers, says Dr. Quasha.

Dr. Quasha is making a simple but effective case for the disruptive nature of stereotype threat. Stereotype threat, in this context, refers to the fear of being considered gay by others, usually more socially powerful peers. Stereotypes about gays are consistently negative among young teens, often held as a global, diffuse negative attitude.

I am not sure about this, but I think stereotype threat operates in two broad ways. For students who are sure or pretty sure they are gay, the threat is that the social group will believe or assume every negative stereotype about gay people. For non-gay or unsure teens, I think the threat is that they will be considered gay and that such assessments are negative. Hopefully, a school environment tolerant of differences and intolerant of harassment will make improve life for both categories of students.

The article considers people who hold all shades of beliefs regarding homosexuality with a money quote from Dr. Caitlin Ryan:

After almost a decade of research on gay, lesbian, bisexual, and transgender teens, Dr. Ryan’s group has found a clear pattern: The more supportive the parents and family, the better kids do over the long run. “That doesn’t necessarily mean changing your deeply held beliefs,” Dr. Ryan explains. “It means finding a way to balance those beliefs with the love you have for your child.”

Parents are called on to seek that balance all the time. Children do all kinds of things parents do not like or approve of but the role of parent involves providing love and direction. These values have to be balanced and carefully woven into an attachment that is like no other.

Even parents who can’t be fully accepting can find ways to be supportive. “You can say, ‘I think this is wrong but I love you and I’m going to be here for you,'” Dr. Ryan suggests. “Be willing to listen. Give your child a hug.”

This advice won’t please everyone but seems a reasonable compromise. In some cases, the agree to disagree approach leads to mutual respect and the maintenance of a solid attachment. In other cases, as noted in this article, parents become more accepting, even supportive.

I appreciate that the author reached out for comment from people of various faiths, in order to highlight the value of mutual respect and tolerance.

We all need to speak more carefully, says Father Mike Tegeder, pastor of the Church of St. Edward in Bloomington, Minnesota. “The Catholic Church teaches that each person has dignity, whatever their race or gender or sexual orientation,” he says. “We don’t need to agree with one another, but we have to respect one another’s dignity as children of God.”

And many religious groups agree. Exodus International, a conservative Christian organization that had previously encouraged kids to speak out against homosexuality, changed direction after the recent string of suicides, deciding to advocate “biblical tolerance and grace” instead of confrontation. For Warren Throckmorton, PhD, an associate professor of psychology at Grove City College, a Christian school in Pennsylvania, the group’s reversal was an obvious choice. “It seems to me that Christians should be first in line in saying that everyone should be treated the way you yourself want to be treated,” says Dr. Throckmorton, a traditional evangelical who recently developed The Golden Rule Pledge, a program specifically designed to help conservative churches prevent antigay bullying.

The article provides resources for parents and community groups, including the Golden Rule Pledge and provides a clear message that respect for the dignity of all is a virtue about which we all should be able to agree. Let me ask social conservatives who want to criticize this article. What do you have to offer instead? How can the Golden Rule be wrong or inadequate? Do you like to be stereotyped or to be the target of demeaning rhetoric? I assume not, so don’t do it to other people.

UPDATE: Sigh, just after I posted the above, I saw this article in the Christian Post, describing the efforts of “an interfaith coalition” to block the NJ Anti-Bullying Bill of Rights. Instead of demonstrating respect during the Week of Respect mandated by the bill, the coalition wants to have their own week, called “Morality Awareness Campaign.” The coalition was also glad to have private religious schools exempted. Watch this and ask yourself if that was such a good idea. Really, watch this…