Last year and early this year, as a component of reporting on Uganda’s Anti-Homosexuality Bill, I wrote a bit about the Fellowship Foundation. Author Jeff Sharlet reported in November of last year that the main movers of the Ugandan proposal were associated with the Fellowship. As the matter unfolded, it has become clear that those behind the bill are associated with the Fellowship, but outside of Uganda, many other Fellowship associates oppose the bill. In particular, former Ford and Carter administration official, Bob Hunter offered vigorous public opposition on behalf of the Fellowship. To get the context, Jeff Sharlet’s guest post here on the subject is well worth reviewing.

The signature event associated with the Fellowship Foundation is the National Prayer Breakfast. The Fellowship organizes the event for the Congress with the President sometimes taking an active role in inviting guests from around the world. Held the first week of February, speculation was high in January about who would attend from Uganda. In relationship to my reporting on Uganda, I was invited to come to the National Prayer Breakfast to learn more about the event and the group behind it. 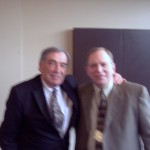 As an aspect of that visit, I was given a rare opportunity to sit down with spiritual leader of the Fellowship, Doug Coe. He grants few interviews, in fact, I only know of a handful, but he was glad to affirm to me that Uganda’s Anti-Homosexuality Bill was completely inconsistent with his vision for the Fellowship. Today, Christianity Today published the rest of the interview on their webite.

Over the next week or so, I will be reporting more on my visit to the National Prayer Breakfast. In this post, I want to begin by providing the talking points for a meeting where delegates from Africa were given information about the essential aspects of the National Prayer Breakfast work. In the legislatures of many nations, Fellowship groups conduct prayer breakfast meetings with similar aims as the US version. What follows is a document used to explain the Fellowship at an African gathering at this year’s event.

Eight Core Aspects of the vision and methods – the National Prayer Breakfast work:

Number 7 echoes what Coe said during the interview:

Coe said that Lincoln was always faithful to go to church, but never joined a church. When asked why he stayed unaligned, President Lincoln replied, “When I find that church which has as its only creed ‘to love God with all its heart, mind, soul and strength,’ I will gladly join.” Coe seems to want the Fellowship to be the kind of group Lincoln could join.

For now, let me note that Coe rarely speaks in public and rarely takes public positions on issues. He was willing to do so in order to say that the Anti-Homosexuality Bill was inconsistent with his vision of following Jesus.

I am very interested in observations and dialogue regarding the interview and the summary points above. There were many more questions I will ask Mr. Coe if given the opportunity. I suspect this will have an interest to many outside the Ugandan anti-gay bill so I hope the discussion will not be limited to it.