It must be Bailey week here on the blog. I am reporting here on a study done in his lab led by Northwestern undergraduates Adam Safron and Ben Barch. The study titled: “Neural Correlates of Sexual Arousal in Homosexual and Heterosexual Men” was published in the April, 2007 edition of Behavioral Neuroscience.

Dr. Bailey described this study at the December conference at Catholic University. Essentially, brain scans demonstrate that activation in the brains of gay and straight men differ in response to sexual images. The abstract reads:

Men exhibit much higher levels of genital and subjective arousal to sexual stimuli containing their preferred sex than they do to stimuli containing only the nonpreferred sex. This study used event-related functional magnetic resonance imaging to investigate how this category-specific pattern would be reflected in the brains of homosexual (n = 11) and heterosexual (n = 11) men. Comparisons of activation to preferred sexual stimuli, nonpreferred sexual stimuli, and sports stimuli revealed large networks correlated with sexual arousal, spanning multiple cortical and subcortical areas. Both homosexual and heterosexual men exhibited category-specific arousal in brain activity. Within the amygdala, greater preference-related activity was observed in homosexual men, but it is unclear whether this is a cause or a consequence of their sexuality. In a subsequent analysis of regions hypothesized to support arousal, both participant groups demonstrated widespread increases in evoked activity for preferred stimuli. Aggregate data from these regions produced significant differences between stimulus types in 16 out of 22 participants. Significant activational differences matched reported sexual orientation in 15 of these 16 participants, representing an advance in psychophysiological measures of arousal.

At the Catholic University conference, Bailey showed videos of the collective response of men to preferred sexual images compared to neutral images and the results were striking. There was lots of activation with preferred sexual images (gay men to men and straight men to women) and next to nothing with non-preferred imagery. Here is his description of the scans:

And what I’m going to show you next is a movie. It’s a quick movie of somebody’s brain activity while he watches — well, it’s a contrast, actually — preferred stimuli minus neutral. So, this study has both gay men and straight men, and this is the way their brain reacts when they see their preferred sexual stimuli, which, for a straight man, would be women, for gay man would be men, against watching neutral things like — actually, our neutral stimuli here are people playing sports.

And the thing to pay attention to, these hot colors mean that preferred is activating the brain more than neutral, these cold colors mean that neutral stimuli is activating the brain more than preferred. Doesn’t really — just look at all the — you’re going to see a lot of colors like this. Okay? …did you see all those bright colors there? That is a big, big, bold brain reaction to preferred stimuli. The brain really likes seeing preferred sexual stimuli, in men. 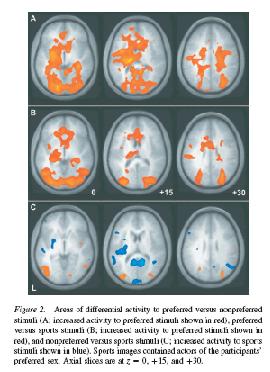 Were all subjects congruent with their self-reports? No, one subject, “Participant 16” demonstrated activation to same-sex imagery but his self-report was heterosexual.

Was participant 16 bisexual? In denial? Bothered by the procedure? Hard to tell. Dr. Bailey thinks his erotic preferences were really same-sex but his self-concept straight. In practice, who knows? In theory, someone like this could experience attractions to the same sex and process those attractions in a manner that would not lead to a self-attribution of being gay. To me, this highlights one interpretive issue with research like this. Clearly, brain reactions were different associated with sexual orientation differences – and before the person was very aware of the stimuli. However, humans may make a variety of meanings of the same brain activity. This research can tell us what brains are doing but not exactly what it means to any given individual.

Another issue of some import to me as Dr. Bailey and I collaborate to apply this technology with ex-gays is the difficulty some religious participants will have viewing nude pictures. We will need to discuss how what the brain might do with mixed feelings about participation and where that state might show up on the scan. And we might need to have another set of pics to view.